Rabbi Arthur Weiner arrived in Paramus in August of 1996 to serve as the Rabbi of the JCCP/CBT.  Ordained at the Jewish Theological Seminary of America in 1989, he served as the Rabbi of the Heska Amuna Synagogue in Knoxville Tennessee for seven years before relocating to Bergen County. While in Knoxville, he was honored by the Council of Jewish Federations and the Southeast Region of the United Synagogue of Conservative Judaism for his efforts on behalf of the Jewish community.

Rabbi Weiner is also a former Chaplain in the United States Naval Reserve.

In addition to his many synagogue responsibilities, Rabbi Weiner is a past officer of the New Jersey Rabbinical Assembly, the North Jersey Board of Rabbis, and is currently a member of the Jewish Community Relations Council of the Jewish Federation of Northern New Jersey.  He is also the former Chairman of the Bergen County Jewish Learning Project.  Rabbi Weiner is a certified Mesader Gittin, (certified Jewish divorce specialist), one of only 36 Rabbis throughout the Conservative movement authorized to facilitate Jewish divorce by the Joint Bet Din of the Rabbinical Assembly.

Rabbi Weiner has been honored by the JCCP/CBT, the Israel Bonds Development Corporation, the State of Israel, and the Borough of Paramus, NJ for his outstanding work on behalf of the synagogue, and local community.

Rabbi Weiner has taught us, “Do not separate yourself from the community. (Pirkei Avot 2:4). Almost 2000 years ago, our sages taught this important lesson to our ancestors. Participation in the life of the Synagogue and involvement in the Jewish community is essential because no one can be Jewish all alone. Ours is a tradition that has always taught that we find G-d in the context of a strong supportive community. We offer a tremendous array of opportunities precisely because we want to encourage participation in the life of our community. We know that one approach does not suit everyone. We believe strongly in our philosophy of welcoming Jews of all backgrounds to our congregation, while remaining devoted to the principles of authentic Conservative Judaism.

Rabbi Weiner is married to Dr. Shira Weiner, a professor of Biomechanics and Ergonomics at New York University, and a professor of Physical Therapy at Touro College in NYC.  They are the proud parents of Sam, daughter-in-law Marianna and their daughters Rina and Adira; Danit and son-in-law Josh and their daughter, Ava; and Aviva, and son-in-law Pinchas. 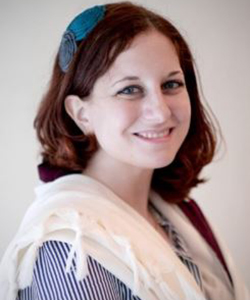 “I am so excited and honored to be joining the Fair Lawn Jewish Center/Congregation B’nai Israel,” said Rabbi Salston. “This has been an uncommon hiring process, amidst COVID-19, but I am so glad that we have found each other. Even though I have only been to the synagogue once in person, I feel at home in the community, which is so much more than the building. We are a community that cares about each other, prayer, and Judaism.”

Rabbi Salston is a graduate of Brandeis University, where she received a Bachelor of Arts in Neuroscience with a minor in Near Eastern and Judaic Studies. She then attended the Ziegler School of Rabbinic Studies in Los Angeles, earning her rabbinic ordination as well as the United Synagogue of Conservative Judaism’s Award for Congregational Leadership, in 2018. While in California, Rabbi Salston served as a rabbinic intern at Burbank Temple Emanu-El in Burbank, CA, where she led worship services, taught Torah and prayer classes, and ran Tot Shabbat and preschool celebrations.

Following her ordination, Rabbi Salston returned to the East Coast, serving as the Ritual Director at the Park Avenue Synagogue in New York City before becoming Chaplain at the Robert Wood Johnson University Hospital in New Brunswick, NJ. She also served as a part-time Rabbi at the East Brunswick Jewish Center in East Brunswick, NJ.

Rabbi Salston is a Soferet STaM (Ritual Scribe) and specializes in Torah scroll repair and restoration, using archival and scribal techniques. As such, she is a valuable resource to the Jewish community on issues related to the fitness and usability of Torah scrolls.

Rabbi Salston has a passion for social justice and human rights, and has traveled to Thailand with American Jewish World Service and to India with the American Jewish Joint Distribution Committee. In her spare time, she enjoys baking, needlework, yoga, and running.